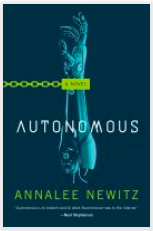 “What characteristics would you use to define sentience?” I annoyingly asked at a local reading of this book’s introduction. Word of advice: don’t ask the author the question they write their book to answer. If the premise of their creation could be solved in a Q&A session, why write the goddamn book in the first place?

Fiction is meant to link what we otherwise couldn’t explain without the freedom of descriptive experiences. Isn’t that what art is for, especially in its most elusively imaginative forms such as sci-fi and fantasy? The philosophical among us may be able to use maieutics to effectively get our points across to our friends, but, as my partner often laments, it can all get too theoretical to actually discuss after a point. And so enters the illustrative power of narrative.

In her debut novel, Newitz balances theory with contemplative imagination, weaving not just another cautionary tale about the dangers of humans playing god. Her characters, both human and android, have a depth that can’t be ignored. While the dialog may not sweep you off your feet, and while she seems to grapple like most of us writers with how to show instead of overtly tell the foundational elements of her world-building throughout the story, the skill with which she captures the inner workings of her android characters is undeniable.

Does this version of events have anything new to offer within our overstuffed literature on the topic of what constitutes an autonomous existence? I’d say absolutely. Because Newitz isn’t only exposing the multitude of possible consequences of creating steel-servants in humanity’s own image. The book also boldly broaches topics of slavery, both for the androids in her story, as well as for their human equivalents. In Newitz’s sci-fi world, the characters find themselves enslaving their own children based on a moralistic premise of equality in which they are left asking whether they can justify hoping for sentience within beings they’ve created while still being unwilling to set their creations free to choose their own adventures. Newitz not only revisits the themes of indentured servitude explored in both the original and the revamped West World stories (among many other such tales), but she pushes the envelope back across the table to demand the reader consider a world where the android versus human allegiances are becoming more and more blurred.

All in all, I was surprised to discover this isn’t another story exemplifying the us-versus-them saga (as much as our tiny rat brains might long for whole buckets of these). Instead Newitz explores the landscape of a world of merging consciousnesses. And in our current world where we have to constantly beat prejudice over the head as it tirelessly threatens to again rule the day (and in many ways, sadly, already has), such an exploration is so so needed.