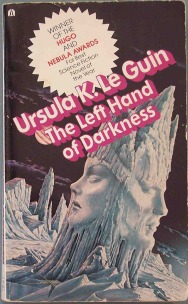 Let’s talk about world-building, shall we? To start out: What if gender weren’t a thing? No, seriously. Don’t glaze over that too quickly. What . . . if . . . gender . . . weren’t . . . a . . . thing? Well, there goes chauvinism right out the window. But also, there goes feminism and “nagging wives” and “distant workaholic husbands” and pay inequality, not to mention prescribed and presumed roles within the work place, the home, social engagements, everything, baby! And (this is my favourite part) there goes all the pent-up anger at all these bits of our anthropology that we’ve been struggling against or clinging to for, well, the existence of recognizable culture within our species. This is the premise of the world Le Guin creates in her award-winning (both the Nebula and the Hugo) book.

Grethen is truly a fantasy planet, covered with intricate mysteries beyond yet also linked to the absence of fixed genders among its populace. Le Guin understands the root of prejudice is difficult to escape wherever culture abounds. For Grethen also has that, i.e. prejudices, in abundance. Along the main character’s journey, he (being a foreigner, sadly stuck in a forever-gender body since birth) meets residents of the planet who take drugs to suspend their otherwise monthly gender cycles (please note that Le Guin doesn’t entirely preclude gender, but the planet’s residents are certainly gender-fluid, if nothing else). While these drug-induced gender-benders are seen as spiritual savants by some of the populace, they’re also stigmatized as highly unnatural. Le Guin seems keen on showing that individual choice will always be a hard one for any self-identifying “cultured” species to get over.

Okay, so looping back to world-building, Le Guin (are you missing her as much as I yet?) doesn’t leave her environment with only this androgynous-leaning landscape of culture. She makes sure to bring other fundamental understandings of the characters’ universe into the reader’s view. For example, while the land is covered in endless layers of falling snow and shifting ice for much of the planet’s revolving year, there are no flying species (no mosquitoes, no flies, no birds) so that concepts such as space ships, airplanes, and even angels are met with baffled wonder. Spirits fall like delicate flakes of snow instead of floating upward to the atmosphere like doves. This planet is filled with a people well-grounded, with the literalness of that concept permeating how they conduct all their affairs, both in the comforts of the homes they occupy and their sometimes frightfully harsh political arenas.

And then there’s shifgrethor. What? That’s the constant question of the story’s main foreign narrator. In a world without flying anythings, where fixed gender is viewed with curious disgust, Le Guin showcases the primary cultural differences between the two dominant nations on Grethen through this word. Coming out bit by bit, shifgrethor is all about the security of a type of knowing that comes by contrast. This exploration of contrasts seeps through Le Guin’s work, as she seemed highly intrigued by ideas like shadow versus light (taking her Earthsea series as another primary example), for one without the other has no meaning, just like flight or feminism have no meaning without their opposites. How would you even begin to be able to describe a concept like grounded without the fundamental understanding that another mode of transport was even possible? How could a person be offended at presumed gender roles if everyone shared responsibilities because gender was not a thing?

Le Guin’s book is the best example I’ve read yet (and probably ever will) of how a culture’s foundational perceptions drive expectations. There’s so much in this book that it’s a challenge to comment with even the semblance of intelligence on its complexities. Let her always stand as a model world-builder, friend, for I challenge you to find better.