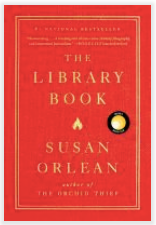 The morning of January 30th, earlier this year, I burst into tears in the shower while listening to Susan Orlean describe in horrifying detail the fire that consumed the L.A. Central Library branch in April 1986. It’s not that the description was a surprise, as I knew making that particular library fire famous was in a way the point of the book Orlean was presenting to her enthusiastic readers (there are still 308 holds on my local library system’s 78 copies of the hardcover version, not to mention 170 holds on their 29 copies of the downloadable audiobook version). But somehow the word-spun images she conjured of the white-hot flames gobbling their way through the library stacks left me sobbing with one hand on the cold, steam-crested tiles and the other covering my mouth’s perhaps overly-dramatic distortions of grief.

I’d like to talk about the structure of Orlean’s content in this one, especially since I’ve been studying the various options any storyteller, be they playwright, author, documentarist, composer, or other, has at their disposal for putting one piece of a tale in front of another so as to best lead an audience through some semblance of the experience desired.

In her initial chapter, Orlean introduces the possible culprit of the legendary L.A. Central Library branch fire, the fire that the reader knows will be the catalyst for the rest of the book, from which the rest of the spokes of wandering historical investigative writing will extend. Let’s call this portion of the book the “hook” with which Orlean catches her readerish prey.

Second, Orlean lets the reader know she believes in libraries and definitely in books. To accomplish this stage-setting, which will ultimately serve as a harsh bed of smoldering book pillows into which her audience will, pages later, be able to bury their tear-stained faces, she talks about her own history with libraries in the experiences of her youth, retelling how her mother used to take her to the library every week so she could claim a new stack of books to pile in a cherished tower on her lap during the car ride home while she and her mother would discuss with utmost seriousness what reading order would allow them to beat the already impending due dates. This is undoubtedly the empathy tactic that all writers should know, which allows the curiosity of the first part of a story to be inextricably linked to the emotions of the audience.

Third, Orlean speeds the reader through the trauma of the legendary fire itself, a breathtaking description I cannot add to, and so won’t try here. In this way, Orlean pulls the line tight around the hook of the initial part of her storytelling. We’ve been given intrigue, we’ve been given a reason to care, and then we’re subjected to the terror of experiential description that merges the first and second parts so that we can’t stop turning the pages to try and find the justice of explanation.

Next, Orlean takes her readers with her on a deep-dive investigation of the alleged L.A. Central Library branch fire-starter’s history, from his family’s narrow escape from the Midwestern dust bowls of the Great Depression, to their struggles with a simultaneously promising and yet fleeting Californian economy during the initial stages of the space race era. Here she adds a human element to the outrage her readers might well be feeling.

Finally, Orlean leaves the reader to conjecture about the who-done-it aspect of the story and moves on instead to talk about the science and slog, at times, of running a library, what this takes, how it’s been approached through history, and how librarians today view their calling with all its implications of stewardship and social justice activism. Among this portion of the book, the reader is given a view into Orlean’s almost religious ponderings about the place of books and the written word within human history. This was, by the way, my absolute favourite part of the book. What better way to give credence to the topic you’ve chosen to have at the heart of your book than to pay the highest homage to that topic, building it up to Olympus’s summit?

“A book feels like a thing alive in this moment. And also, alive on a continuum from the moment the thoughts about it first percolated in the writer’s mind to the moment it sprang off the printing press, a lifeline that continues as someone sits with it and marvels over it. And it continues on, time after time after time. Once words and thoughts are poured into them, books are no longer just paper and ink and glue. They take on a kind of human vitality. The poet Milton called this quality in books, ‘the potency of life.’”

For the rest of the book, Orlean moves back and forth through time, detailing the variant destruction and rebuilding of not only the L.A. Central Library but libraries around the world as a pastime and point of intellectual, as well as social, pride. All the while she doesn’t let the reader lose sight of the question of the great fire’s origin. These final sections, if we’re continuing to follow the structure of Orlean’s book, give the perfect climactic rise of emotions as Orlean follows the court cases surrounding the alleged fire-starter’s later life adventures, pulling a Capote in a way so that the reader almost wants the accused to escape. Then the denouement clasps gentle hands around the audience so that solving the mystery is outshone by the need for the revitalization of the cathedral of books that is the true heart of Orlean’s work here. (I’ll let you explore the ultimate conclusions she reached regarding the case itself in your own reading adventure of this book.)