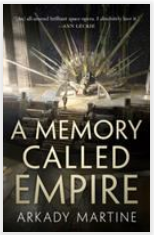 There’s a lot to chew on in Martine’s debut novel. The two most poignant themes that caught my attention, however, were the ideas this author weaves into her plot concerning colonialism and the best way to preserve institutional/cultural knowledge. Let’s take each in turn, shall we?

For a space opera novel such as this, descriptions of a society that governs via colonial conquest couldn’t be a better place to start. Martine borrows from her historian’s background to bring to this space epic a reminiscence of the Byzantine Empire and the European colonization of the New World.

This theme has been especially on my mind lately with some of the other books I’ve been plunging into and sampling the last few months. What gives a culture the idea that it has a particular right to impose itself so fully on all the other cultures it gobbles up in its perpetual need for acquiring? Perhaps this is just another example of evolution’s “survival of the fittest” mantra—-as if this justifies all societal injustices. Perhaps we’re simply dealing with The Poisonwood Bible revisited, a kind of “institutionalized oppression gone wild” ideal.

The cultural confusion Martine’s main character displays throughout the novel is a good example of how sideways this type of “my right is the only right” mentality can go. Yet Martine also does a good job of allowing her main character to keep her mind set on the cultural goals of her own distant society. Mahit Dzmare is a true ambassador for her non-empire-absorbed Lsel Station as she works within the story to fight against the Teixcaalan Empire’s continuous hunger for more and more domination of the worlds they say they are simply inviting into the “civilized” world.

Any definition of what makes a culture or society civilized is hard to pin down to be sure, both in real life history and in this book, because the subjectivity can too easily get lost in a war of “the mightiest always win.” And this is where institutional knowledge (a.k.a. culturally historical, in this novel, as opposed to a company’s knowledge-base . . . this is a shout-out to all the other archivist nerds, of course) comes into play. A better term for the concept displayed by Martine’s Imago technology in the book might be categorized as institutional memory boxes. These Imago devices, a well-kept cultural secret among the Lsel characters’ society, act like time capsules in my archival-based mind. They at once allow the user to understand the ideas and first-hand experiences of their predecessors, all while the Imago machines also consciously work to specifically not overrun the next generations’ own experiences in realtime.

In this way, the Lsel Station culture, in my estimation, wins out over the Teixcaalan Empire in the race of ever-expansion. Because Lsel’s culture is a convergence of both the past and the present, built meticulously on the gift of perpetual learning from its ancestors so as not to repeat the mistakes of those that have gone before. The Teixcaalani, on the other hand, only have their unchanging, tradition-held oppression-model to copy again and again, so that the cultures it engulfs get swept under the rug at each new conquest, and nothing is gained except a recurrence of what has always been known. Ideas of what is culturally acceptable are pressed again and again into the minds of the conquered until they become ultimate truth without consideration of “the other” as a result. I would like to argue that the Teixcaalani model is not a true example of actual growth because history has shown enlightenment can’t truly be obtained through a simple recycling of the past.

Martine has promised more novels in this universe, and I’m hopeful that she’ll play with these themes more in her books to come. A Memory Called Empire seems to only scratch the surface of the potential inherent in ideas like memory preservation and cultural expansion in all their multifaceted forms. But this is an archivist talking, so, yeh, the bias is pretty strong, to be sure.