The Word for World is Forest by Ursula K. Le Guin | Review 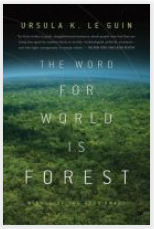 “You must not pretend to have reasons to kill one another. Murder has no reason.”

Le Guin’s anthropological interests scream through this novella. The history of human civilization has certainly taught us, if we have been listening, that cultures influence each other, they bring new ways of seeing crashing into one another, usually with such astounding violence that the participants often don’t understand the true impact until they’re left standing in the resulting rubble. The Word for World is Forest captures this concept with frightening skill, exploring the multitude of perspectives involved in these types of cultural struggles. It is this story’s ability to exemplify various opposing perspectives simultaneously that I’d like to argue is the true mastery of the story.

The caricatures Le Guin uses in this book kept me wondering about the totalities of personalities that are often overtaken by one-sighted goals. In Captain Davidson (a Terran, meaning in this story that he’s from Earth), we have the epitome of self-indulgent evil. In the scientist Lyubov (also of the Terran persuasion, but of a more mediating make-up), the opportunity for an open-ended comprehension of “the other” is made almost possible. In Selver (a native to the planet Ashthe), the spirit of learned violence manifest as outward-facing retaliation is brought to light. These main players within Le Guin’s story move around the plot-line like pieces on a chess board, each given room to present their unique internal perspectives and goals.

How exactly does the conquering, self-appointed dominant species see itself and its actions? How does the mediating scientist become blinded to his place in what he can only foresee (and perhaps rightly so) as the impending doom of a native culture and ecosystem? What will be the eventual responses of the suppressed native culture as it tries to find justice and a way out of the insanity forced upon it? Is solidarity only accomplishable in the face of suppression?

As Le Guin points out within the narrative, “Revelation was lacking. There was no seeing everything at once: no certainty.”

Amidst all the nail-biting tension this book offers, one point in Le Guin’s story caught me completely off guard. Specifically, the Ashtheans’ massacre of the Terran women confused and shocked me as I raced through the pages where Le Guin described the Ashtheans’ attack of the Terrans’ Central encampment. By this part in the story, Le Guin had already made clear for her readers that the female gender role has a distinctive place of honor within the Ashtheans’ society, not to mention that the Ashtheans had, until then, no notion of why any sentient species would purposefully kill other sentient beings. Almost as quickly, however, I realized the significance of cultural influences Le Guin was proposing with this choice of her plot’s direction. The Athsheans had decided (or had, more pointedly, learned from the examples given by their oppressors) that the preservation of their species could only be gained through reactive violence. To the Ashtheans, a species exuding nothing but evil and destruction should not be given the option for reproduction, because to breed a species with the tendencies exemplified by the Terrans would be to breed that same baseline of evil and destruction. And to what I’m perhaps too boldly guessing was Le Guin’s point, the solutions to problems as learned by an oppressed people from such a cultural dominance as she is showing here should be exactly that level of shocking to the reader, to say the least.

Le Guin never seems to shy away from the harsh realities of consequences in her writing. I don’t think it’s off-base to say that this is why her story ends where it does, with the first-noted quote I’ve included above. The impacts each of the species in this story have on each other are certainly sobering. The Ashtheans learn how to end the lives of other sentient creatures when the continuation of those lives poses a threat to their world. And subsequently, the Terrans learn (eventually and with much flaying about in the process) that they are not as privileged as they once would have liked to think, to the end that some of them begin to understand the dangers of their influence on the universe they have been trying so desperately to bend to their will.

These themes show up in many of Le Guin’s other stories and books, so it would be easy to conclude that they were close to her heart. The scene in this novella that connects the plot within her Hainish universe comes in the very third chapter, where not only the ansible (a futuristic communications device Le Guin invented within her novel The Dispossessed, which allows instantaneous transmission of messages over lightyears of distance), but also in the idea that all sentient species across the unknowably vast universe were evolved from a single starting point of life. The idea of the inevitable interconnectivity of the universe is evident here. And further, the Terrans’ refusal to accept these “theories” of connectivity works very well to compound their proposed ignorance within the story’s plot.

Was Le Guin writing this in a fit of anger against the self-destructive behaviors of her own species? (In her essay “On What the Road to Hell is Paved With” she confirms this was in fact true, admitting that this book was her response to the Vietnam War.) Reading this book and some of her others in the Hainish series, it’s easy to see she held an all-out disgust for many of our species’s historical conquests made in the name of ”civilization” and in the name of “peace.” Drawing from another example, Le Guin offers the perspective of the conquered also in her novella Wild Girls, where raping, pillaging, and slavery are shown again within the reality of what they are: self-destructive, and therefore despicable, ways of existing.

I was left with a feeling of deep regret after reading this book in particular. What are we teaching ourselves in the perpetuation of the practices we so often qualify as our natural state of being while we grasp for our own survival, and what are we giving future generations as the examples of the true price for such survival? Is it worth it in the end? Maybe we should try harder and tread much much lighter in the wake of our own rampant ignorance.

At the beginning of this book, I wanted the Ashtheans to wipe the Terrans off the face of their planet. By the end of the book, I was ashamed at my own tendency toward the violent answer to a seemingly insurmountable injustice. (More on this, if you’re interested, can be found in Le Guin’s essay “About Anger.”) Again, the quote at the top of this review rings in my ears like thunder reminding me that I too have a long way to go to curb my own need for violence-driven vengeance (to clarify: I have never contemplated a violence as extreme as murder). Like the Hainish characters in this story, I‘m hoping to someday have the wisdom to know when to step back, and then when to step just enough forward to say to the aggressors, “It’s time for you to stop this behavior.” With her Hainish characters, Le Guin seems to remind her audience of the importance of choice, alongside the importance of looking the consequences of our species’s actions full in the face so that we can, however feebly, move toward (hopefully) a better existence as we begin to understand our place within the ecosystems and cultures we dare to traverse.