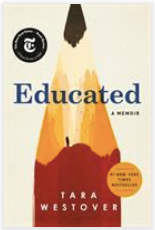 There are times when another person’s story seems to become an almost perfect mirror of one’s own journey through life. This is where solidarity is born, and I believe this is the primary purpose of any memoir. Yet, perhaps this is just a symptom of the human brain’s constant longing for meaning and relatability where perhaps none really existed before the careful observations of the curious mind began to tease import out of the chaos of daily living. Even if the nihilists want to argue, however, that there is no actual meaning or relatability available outside our own tenuous and perhaps emotive brain connections, I’m okay with the idea that, in the midst of all the chaos and hurt life so often offers, we should take what we can get and recognize every connection as a goddamn miracle.

Westover’s memoir had so many similarities to my own life that it almost scared me (somewhat because a friend and I have also been chipping away at creating a joint memoir with a somewhat comparable theme for the last five years, but that’s . . . cool, not to mention super inspiring). Westover’s book tells the story of how the gift of education helped pull her out from under the self-deprecating guilt of being continuously abused in the midst of a strictly religious family that held immovable beliefs about what parts of society a person should participate in and what parts they needed to stay away from. The lies of “safety” perpetuated by her family impressed me very much. In the end, Westover’s family rejected her disapproval of the ongoing abuse that she and her siblings had long suffered at the hand of the family’s older brother. However, the escape she ultimately found turned out to not only need a physical distance. She had to also reorganize (not just recognize, mind you) her own understanding of her very identity.

A person’s family and the identity that that person is given during their formative years can be a lifelong trap of recurrent wrongs and recycled misconceptions. Through her memoir, Westover explains the strength of will needed to recreate one’s own identity, and this against the prescriptions of a family bent on only seeing its members and the world through a particular lens.

I applaud her for writing her memoir (not that a person only gets one in their lifetime, as I’ll explain in a bit here) in her late twenties and early thirties. She talks about this in an interview with Better Reading, saying that while she understands a lot of memoirists wait until later in life to write down and explain their experiences on a particular topic, she wanted the emotions of her story (the ones particularly about leaving her family and redefining her self-identity, literally having to rewrite her own history) to be immediately available to her during the writing process. This is where the encouragement came in full force for me in reading Westover’s book, because I’m in agreement with her method, even though it may scare the shit out of my writerly pen at times. The bravery of such an endeavor is undeniable.

So what is a memoir, and why don’t you get just one in your lifetime? According to Marion Roach Smith’s wonderful guide book The Memoir Project: A Thoroughly Non-Standardized Text, a true memoir finds its difference from what we might traditionally think of as an autobiography because a memoir is a snapshot of a theme inherent in a particular portion of a person’s life. To write a memoir and to write it well, that chosen theme needs to be exemplified through the telling of very specific instances from the author’s memories. The flashbacks, so to speak, that are artfully pieced together in a well-crafted memoir give voice to that theme, breathing life into the form that I mentioned before so that the reader can find relatable handholds with which to grasp a deeper meaning that might, hopefully, help that same reader transcend what can often feel like an otherwise depressingly solitary experience.

For myself, these handholds were available at almost every page turn in Westover’s memoir. Of course, it’s not a one-to-one comparison (because everyone’s story is a masterpiece that only he or she or they get to claim as their very own), but the similarities of our experiences made me want to fist-pump with joy at knowing that I’m not alone. While the religion of choice in Westover’s upbringing was predicated on fundamentalist Mormonism, mine was of a more conservative Baptist flavor; while the intellectual breakthroughs that helped Westover finally see her family’s religious fervor from a suddenly outside perspective happened primarily at Cambridge, mine came through my academic experiences at Oxford (aren’t rival universities just the best?); and while the abuse Westover survived was mainly coming from her older brother, mine came from the patriarch that my mother chose during my childhood to bring into her household. But the underlying theme seems to be riding the same lines of frustrations and guilt-riddled confusion in many ways. We both had to decide whether we had the strength to finally get out of there. We both had to come to grips with our own self-loathing handed down to us in the lies of constant failure that our families rained down on us through our growing up years in order to see ourselves at last in light of our own true, self-chosen identities.

I’ve mentioned this mantra before (from the wonderful and eternally gorgeous Lidia Yuknavitch) in a prior post, but it seems to really relate to what I think Westover was trying to accomplish. Yuknavitch’s misfits mantra reads: “I am not the story you made of me.” Westover’s boldness in telling her story reclaims her identity for herself. The bonus feature of the very publication of her story offers a sense of meaning for others, so I’m going to say this is a win-win . . . win! Thank you, Tara, for writing this for the world to find some much-needed handholds of relatability and for other misfits like myself to fist-pump to in the otherwise too-depressing realm of solitude. Thank you for flipping the solitude of loss and abuse into the solidarity of connection and similar experience.