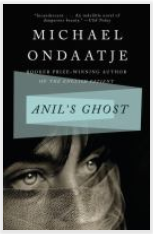 Some books should be read for the author’s mastery of plot, while others win their stripes of lasting worth due to how well they play in the realm of language. I find myself usually attracted to the latter, although I can also understand the appeal of the former. But to me, reading a piece of exquisitely orchestrated prose can be like letting the music of Rachmaninoff, Mendelssohn, or Tchaikovsky (just to name a few) wash over the soul. And this is what I’m looking for in the act of reading most days. Call it a preoccupation, maybe.

While listening to the audiobook version of Ondaatje’s novel, I bookmarked a dozen or so quotes not because I wanted reminders of what actions this or that character was engaged in, or of the major building blocks leading to the story’s climax. Instead, I was collecting the sparkling gems of Ondaatje’s wordsmith talents. Some of my favourites are listed below for your reading enjoyment.

As I was re-listening to these particular quotes for this review, I also noticed that a good majority of them carry the driving force behind what I took to be the book’s message. Namely, that history is a cultural creation. As much as we’d like to say we can objectively report on historical discoveries or that history is a collection of revelations about past events, as long as humanity has greed and drives for immediate survival (evolution just doing its job, I suppose), history will always be subject to these more biased goals.

In Anil’s Ghost, the reader wanders through the multiple, and often disparate, perspectives of its characters as they try each one to hold the sands of history in some semblance of a meaningful shape against the flood waters of time. I’m also a huge fan of somewhat ambiguous endings (which I mention not to give anything away, but to give you a fair heads-up if you’re not into that sort of thing), so I found a lot to admire in this novel.

Favorite lines of the most beautiful and thought-provoking prose from Anil’s Ghost to brighten your holiday season . . .

“Information was made public with diversions and subtexts, as if the truth would not be of interest when given directly, without waltzing backwards.”

“She used to believe that meaning allowed a person a door to escape grief and fear, but she saw that those who were slammed and stained by violence lost the power of language and logic. It was the way to abandon emotion–a last protection for the self.”

“Even reading, she’d gotten entangled sleepily in the arms of paragraphs that wouldn’t let her go.”

“Farther away there were wars of terror, the gunmen in love with the sound of their shells, for the main purpose of war had become war.”

“Most of the time in our world, truth is just opinion.”

“Even if you are a monk [. . .] passion or slaughter will meet you someday. For you cannot survive as a monk if society does not exist. You renounce society, but to do so you must first be a part of it and learn your decision from it. This is the paradox of retreat.”

“He supposed he had always trusted her, in spite of her fury and rejection of the world. He weaved into her presence his conversations about wars and medieval slokas and Pali texts and language, and he spoke about how history faded too, as much as battle did, and how it could exist only with remembrance–for even slokas on papyrus and bound ola leaves would be eaten by moths and silverfish, dissolved by rainstorms–how only stone and rock could hold one person’s losses and another’s beauty forever.”

“A good archaeologist can read a bucket of soil as if it were a complex historical novel.”

“When we are young, he thought, the first necessary rule is to stop invasions of ourselves. We know this as children. There is always that murmuring conviction of family, like the sea around an island. So youth hides in the shape of something as lean as a spear or something as antisocial as a bark. And we become therefore more comfortable and intimate with strangers.”

“He’s going home. So the war, to all purposes, is over. That’s enough reality for the West. It’s probably the history of the last two-hundred years of western political writing: Go home, write a book, hit the circuit.”

“And now with human sight he was seeing all the fibres of natural history around him. He could witness the smallest approach of a bird, every flick of its wing, or a hundred-mile storm coming down off the mountains near Gonagola and skirting to the planes. He could feel each current of wind, every lattice-like green shadow created by cloud.”

Please take a bow, Ondaatje; for such beauty is hard to find.