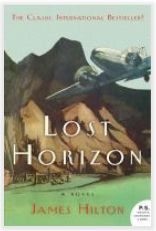 Recently, I’ve found myself amazed at the development over the last century of the explorer’s journey within speculative fiction. Before the well-known theme of spaceships that ran the gauntlet of the outer reaches of this or that solar system or of adventures from galaxies far, far away, the idea of exploring the unknown was predicated on peering down avenues much closer to home.

Originally published in 1933, James Hilton’s Lost Horizon takes the reader on an exploratory journey that has the familiar hint of Jules Verne. I was elated to find out this story’s chosen destination of “the unknown,” in which its characters grapple with philosophies of life, economics, religion, love, death, and eternity (idealized themes right in line with the hopes and dreams of most science fiction readers these days), is none other than the now wonderful and yet ever mysterious paradise of Shangri-La. For Shangri-La (as I’m sure you remember) is not nestled on some distant planet with creative creatures of mixed origins or the product of some biotechnical accident resulting from humans again overreaching in their efforts to colonize their ever-expanding generations. Nope, folks. Shangri-La is simply a ridiculously peaceful and prosperous community hidden somewhere deep within the folds of mountainous Tibet.

Usually, when approaching these types of books — meaning the earlier science fiction pieces — I brace myself for a ride down memory lane in the cultural sense. Male characters more often than not play the role of the egotistical macho, ready to blast any and everything that dares come near their latest and greatest experiment or discovery. I’m thinking particularly of H. G. Wells’s The Invisible Man, as well as She: A History of Adventure by H. Rider Haggard, which perhaps are unfair generalizations, given the historical events that separate these works from Hilton’s Lost Horizon. For example, I don’t think the jarring impact of the first World War on humanity’s collective society can be overlooked, so that to compare the fictional endeavors of Haggard and Wells (who were writing their adventure stories in the very late 1800s) with Hilton’s tale of a recent World War I veteran discovering the tranquility of the elusive Shangri-La paradise . . . well, it’s not a balanced scale, that one.

The only advantage I can see to such a comparison, however, is that it is exactly in the shadow of World War I that Hilton’s character-driven plot is able to race itself toward the safety of the Shangri-La haven. For an offering of paradise only gains in luster when the world’s normalcy has already descended into recent horrific chaos.

The descriptions of the book’s main character, the war-sobered Conway, show this effect in Hilton’s projection of the state of societal consciousness at the time he was writing this story. As each scene progresses, Conway seems to become more and more the hero’s hero. This is a character who can artfully, and with demure measure, navigate through the unknown at every turn. The reader sees Conway again and again, through strong and quiet leadership (you know you’re developing a crush on this fictionalized darling of a personality, too . . . I’ll reserve judgement if you will), helping to keep his fellow travelers from devolving into puddles of fear or into acts of violence when the facts are slim among them.

What more could be hoped for in a fantastical journey such as this than a resting place in which the characters and readers are invited to hide away from the meanness of reality? This book certainly gives a new spin to goals of escapism, bringing the ideals of the unknown and the other-worldly to our very backyard in a way.