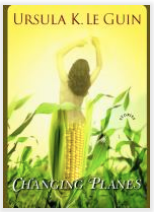 “Wish I’d thought of this story-format!” As a lover of anthro-fiction, this was the first cry that inevitably sprang from my lips upon opening this short story collection. Pure genius! Le Guin, my darling and fearless author of all things anthropologically poignant, you’ve done it again. The premise of the stories encapsulated in this collection is explained in the first chapter of the book, and explained with all the fierceness and beauty Le Guin’s most polished writing can offer. With such a premise as offered in this book, the stories that follow it quickly become a practice in imaginative descriptions of our known reality’s most subtle elements while simultaneously carrying the reader to other worlds emanating with possibilities.

The premise? How does one pass the seemingly endless hours of waiting out an airport’s or airplane ride’s drudgery of boredom? Well, of course! Just turn a bit this way and sway slightly in that other direction until you’ve slipped onto another plane of existence. And voila! The universe of endless anthropological study questions is suddenly your oyster, baby. Le Guin makes sure that these cultural quandaries hit pretty close to home, I have to say.

On such a stage set as this, the book’s narrator is taught all about the mystical magical “Sita Dulip’s Method” of changing planes between various realities. Through this method, the narrator is able to take the reader through the Le Guin’s anthropologically-primed mind. The social structures Le Guin poses within the variable “planes” in this book become absolutely limitless with cultural observations and wonderings. What would a society look like if its inhabitants ceased all forms of communication after age six or seven? How would capitalistic initiative change a world that was previously devoid of such endlessly “gainful” ambitions? What would the second, third, or even hundredth rebirths and subsequent lives lived of each individual within a community do to the voting rights of such a community? If a planet’s years spanned 24 of those familiar to earthlings, with built-in migration patterns dictated by unconquerable weather, how would this change ideas of marriage and family, home and time? What would a society predicated on letting rage rule within strict codes of conduct look like exactly?

I was pleasantly surprised to learn (albeit and sadly after Le Guin’s death last year) that the “K” she insisted on keeping attached to her name was a nod to her father, Alfred Louis Kroeber, a cultural anthropologist who is still quoted to this day in archaeological reports on a regular basis. Having grown up with such a father, it stands to reason Le Guin’s literary endeavors would match the cultural interests that permeated her household during her youth. Arwen Curry’s film The Worlds of Ursula K. Le Guin showcases this influence beautifully, giving animated visualization to how Le Guin was “one of the very finest explorers of questions.” Truly, Le Guin’s stories, especially in this book, invite the reader to fill in the answers for themselves as she presents her endless questions about what makes civilization truly tick.

Changing Planes is not only a collection of short stories about fantastical and scientifically fictionalized worlds, but is at its heart a collection of “what if we really saw ourselves” quandaries. And herein lies the greatest appeal of the rawest kind of science fiction and fantasy storytelling. The cultural exploration in this book is as boundless as the author and reader could ever imagine. Le Guin writes elsewhere that “the purpose of a thought-experiment . . . is not to predict the future . . . but to describe reality, the present world” because “science fiction is not predictive; it is descriptive.” (from Le Guin’s introduction to The Left Hand of Darkness) And it is through the multitude of questions, so masterfully spun story upon story in this book, that Le Guin is able to describe the reality of our world’s internal workings and desires.

This is true anthro-fiction at its best, in that the text challenges the reader to take a closer look at the world in which they truly inhabit and ask the hard “what if” questions. And not so much “what if the world looked this way or that,” but more in line with the “why” that may lurk behind our most-ingrained snap judgments of the cultural subtleties we might not at first understand. Take another look at the questions noted above that come out through the short stories within this book, and consider the implications of their actually being a quandary-based commentary on our here and now. You might be surprised at the similarities you find when thinking of these questions in the context of human history and even some of our cultural-nows.