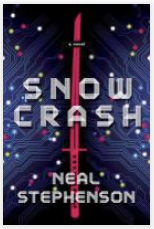 This book started with one of the strangest premises I’ve seen yet. (Hold the phone, however, for a review of Even Cowgirls Get the Blues, coming soon.)

The main character of the story, the one-and-only Hiro Protagonist, is introduced as a pizza delivery employee in the midst of a futuristically-now reality where franchises have taken over the globe’s economic structure, where a digital reality gives space for data collection under the pay of a menacing and yet ever-shrinking governmental entity on some very scary and self-imploding steroids, and where sword-fighting becomes just another day-to-day gambit of survival, baby. The book’s also littered with gaggles of young Kouriers who fly down highways and byways on souped-up skateboards, magnetically harpooning the most convenient vehicles that happen to pass in the direction of their desired destinations, a mafia to give the Godfather himself a real run for his money, and an ancient verbal and neural virus predicated on some weirdly and religiously frisky business to be sure.

As an introductory book into the mind of Stephenson as an author and critic of our current socioeconomic status, the constant tongue-in-cheek way about his prose hooked me immediately. Everything was up for grabs, from neuroscience to archaeological treasures, political commentary to conjectures about how religion has survived and thrived through the history of human existence.

If this all seems a lot to bite off in the one fell swoop that is this ruckus book’s layout and plot, well, the ridiculousness of the premise should tell you what tone Stephenson was after. I literally couldn’t stop laughing and gasping in horror at each turn of every new page. The action scenes are artfully interlaced with snide comments regarding the state of society at the time of the book’s publication. Yet the book also wasn’t without a sprinkling of healthy now-and-then breathers designed to let the reader rest and reflect on the grander philosophies of the universe and humanity’s struggle to exist therein.

My favorite portions of the book, by far, (although not to disregard the beauty and excitement of the endless, heart-pumping action scenes, by any means) were the philosophically and anthropologically rich sections that used Sumerian myths and history to stand up a frightening theory of linguistic development and disintegration.

This leads us to the origin of the book’s title. Snow Crash is the novel’s primary nemesis, a simultaneously digital-based neurological virus and a linguistically mind-fucking drug that has the power to reverse the mythical (perhaps historical . . . it’s up for debate) effects of the famous Tower of Babel. If you’re not up on your Sunday school Bible tales of the structure of ancient civilization, the story of the Tower goes like this: Humans were all connected through a common language once upon a time, and because of the minimal communication issues this posed, they devised to build a tower to heaven itself, but when the god in that same heaven got a whiff of their intensions, he/she/it/they splintered humanity’s common tongue into a thousand-billion languages all suddenly incomprehensible to each other so that the tower-project was forced into abandonment in the wake of miscommunication and linguistic frustration.

Stephenson delves pretty deeply into this subject, spending pages upon pages to explain his philosophy of language’s constant tendency to diverge into cultural and regional specificity with no coherence in sight. Historians of human dialect will tell you that his research is spot-on in this area.

The idea that we can’t ever truly communicate with the world at large also harkens back to Descartes’s idea that “something that I thought I was seeing with my eyes is in fact grasped solely by the faculty of judgment which is in my mind.” In a phrase, all we think we know is bullshit. We can only know what our brain tells us we are perceiving, and nothing in reality is actually realizable. This, sadly perhaps, makes language just another layer of confusion.

If miscommunication is such a bad egg, why did Stephenson set up his book’s primary villain to be encapsulated in a drug that would smash the ever-annoying wall of constant human miscommunications by bridging our otherwise inability to communicate fully? Because, according to Stephenson in the realm of this book, free-floating communication is a virus that stays the ability of creative and freely formed thought, why of course!

If you’re feeling as skeptical as I am, no worries. While the philosophical quandaries may get a bit strangled along the route, there’s lots to plunge into in this book’s text beyond Stephenson’s linguistic conjectures. Besides, the throw-back of technological advancements, minus the Kouriers’ constant ‘pooning, the body-computers, and the weird sword-fighting pizza delivery guys, I’d still like to revel in the irony of the Google Earth predictions, the smoking ambulance drivers, and the limousine printers. Let’s not forget the digital Librarian who helps our Hiro Protagonist through thick and thin digital battle scenes, and the Vietnam vet who is so disfigured from his war encounters that he has to rig up a semi-truck as his neurologically responsive all-terrain wheelchair.

I found this book to be a wondrously cyber-punk action story in the end, with lots of political and cultural tidbits to chew on along the way. Well worth reading, is what I’m saying. So, what are you waiting for? What I’m saying is, get your hands on this one and bask in the light of all things bizarre, philosophical, and culturally obtuse but simultaneously, somehow, poignant.